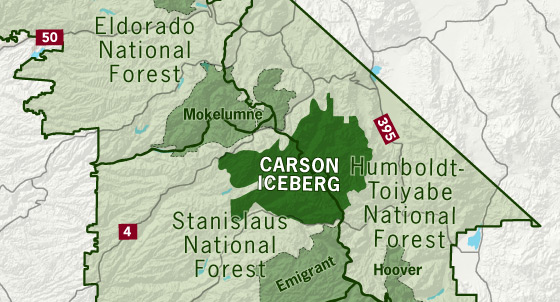 Designated wilderness in 1984 and managed today by both the Toiyabe and Stanislaus National Forests, the Carson-Iceberg includes both eastern and western slopes of the Sierra in its 161,181 acres. Though it lacks modern-day glaciers, the effect of glaciation is clear on its “Iceberg” namesake, a distinctive rock formation near Clark Fork Road on the wilderness’s southern boundary. The area is also characterized by a geologic anomaly – a series of volcanic peaks and ridges known as the Dardenelles.

Climbing from 5,000 feet at Donnell Reservoir to the 11,400 foot Sonora Peak, the Carson-Iceberg contains comparatively few lakes but many deep river canyons lush with riparian vegetation. With almost a third of the precipitation of the wetter western slope, eastern plant life of pinon and juniper subsists on 15 inches of water a year with most of that falling as snow. Watersheds feed the Stanislaus River on the western side and the Carson River on the east, sustaining both the threatened Lahontan and sensitive Paiute trout species.

Once the former mountain warfare training grounds of the U.S. Marine Corps, the Carson-Iceberg Wilderness as well as the Carson River draw their names from Kit Carson, one of America’s early western frontiersman. Following his initiative and boldness the first group of emigrants from the East crossed the Sierra in 1841 just north of Sonora Pass.

Inhabited most recently by the Miwok but for over 10,000 years by other native groups, the Carson-Iceberg, has supported human life for thousands of years. Currently the area supports 10 federally monitored grazing allotments. Its stored waters support the agricultural economy of the Central Valley.

The Carson-Iceberg lies between Hwy 108 (Sonora Pass) to the south and Hwy 4 (Ebbetts Pass) to the north, accessible from both. The PCT crosses through this wilderness, running along the Sierra Crest.

If you plan to start an overnight trip from a Carson-Iceberg trailhead on the Stanislaus, please keep in mind permits can only be obtained from the Stanislaus offices so plan to visit during office hours or call 2-3 days ahead to have your completed permit left in the after-hours box. Permits are required on the Stanislaus April 1 through November 30 each year.

Long-distance hiking along the PCT usually requires planning many months in advance, as PCTA-issued permits and some Park and Forest Unit permits are limited. If you plan to conduct a hike along the PCT that begins on the Mokelumne and extends for more than 500 miles north, or past Tuolumne Meadows to the south, you will either need to obtain a permit from the Pacific Crest Trail Association or obtain permits covering all the National Park and National Forest Units you plan to travel through.

No more than 15 people and 25 head of stock are allowed on overnight trips. Why?

Bear canisters are recommended. Use the Bear Section on this site to learn more.

Campfires are generally allowed within the Carson-Iceberg wilderness, with a few exceptions. In places where fires are allowed, always follow smart campfire guidelines.

Pets must be kept under control and not allowed to harass wildlife or people.

There are ten grazing allotments (nine cattle, one sheep) in the Carson-Iceberg Wilderness. Though it may be a surprise to some wilderness users, the Wilderness Act allows grazing to continue where it was an established practice before the area was designated as Wilderness. Grazing management plans specify animal numbers and length of time in each feed area. Gates and drift fences control livestock movement to prevent overgrazing and to reduce conflicts with Wilderness visitors. Please help by keeping gates closed.

Spanning the Sierra Crest, the Carson-Iceberg encompasses the beauty of both its eastern and western slopes.