“Bears are made of the same dust as we, and breathe the same winds and drink of the same waters. A bear’s days are warmed by the same sun, his dwellings are overdomed by the same blue sky, and his life turns and ebbs with heart-pulsings like ours and was poured from the same fountain…” -John Muir

American black bears, the most common bear species native to North America, are found throughout much of the continent from the Atlantic to the Pacific. In the Sierra Nevada the black bear population is healthy and expanding, usually found between 3000 to 7000 feet where their natural foods are most abundant. While a vast majority of the population lives its entire lifespan without coming into contact with humans, others are not so fortunate.

Coexisting with humans has grown harder for black bears as more people come to the Sierra Nevada. Loss of suitable habitat in the lower elevations has forced bears upward, and many now suffer the long-lasting effects of human carelessness with food storage and garbage disposal.

Aided by a keen sense of smell and impressive dexterity, some black bears in the Sierra have learned to dine on food or garbage that people have left unsecured. Drawn to populated areas, these bears run a higher risk of being killed by motor vehicles, and those that become habituated to humans may begin to approach, or even bluff charge, people in the hopes of getting food. Tragically, when a bear becomes too aggressive, resource managers are forced to kill the bear.

To see a black bear in its natural, wild setting is a rare experience to cherish. With your help we can share the Sierra Nevada with these majestic animals – enjoying their home without interfering in their lives – while they do the same. While you may not always get to see a bear, everyone has the opportunity to protect a bear during their visit. 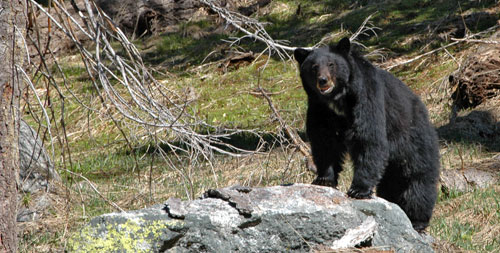